“Red, White & Bard: A Celebration of William Shakespeare in America” is my new one-man show that debuted in April 2018 in Southern California. The show is a culmination of more than two decades of love and appreciation of the Bard–call it the “confessions of a Bardolater.”

For the past eight years, I’ve acted in many of Shakespeare’s plays and taught his works as a teaching artist in Southern California and elsewhere. In 2016, I gave a TED Talk that outlined some of what I’ve tried to accomplish in the classroom. This year, I turned my experiences as a teacher and actor into a show that would highlight the Bard’s prominent role in the United States. With the help of a slideshow and props, I bring in elements of popular culture (Lion King, Frederick Douglass, Keanu Reeves, stuffed animals, and Independence Day, among others) and encourage audience participation, besides reciting several of the famous speeches. The show entertains first and educates second through a joyous survey of Shakespeare in America.

While I’ve performed for elementary school children, my ideal audience is teens and adults. However, performances can be tailored to suit the needs of a specific audience.

Please contact me to see if “Red, White & Bard” is a show you’d like to see in a theatre or school near you! 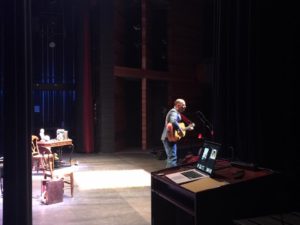 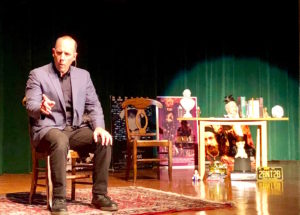