Introducing Rob Crisell’s first novel for middle schoolers The Zoo of Impossible Animals: Into the Underzoo (Available through De Portola Press beginning September 2016). Check back here soon on how to pre-order. 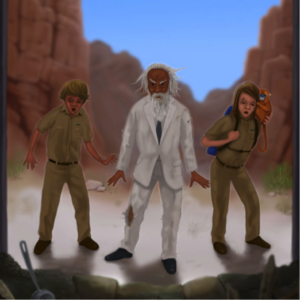 From the book’s back cover:

“For thirteen-year-old Jake Jinks and his big sister Miranda, their summer in rural New Mexico takes a bizarre turn when a mysterious ink monkey named Pablo appears on their doorstep. It turns out that Pablo’s home is the Zoo of Impossible Animals—a top-secret facility dedicated to capturing possibly extinct, probably mythical, and unquestionably dangerous animals called cryptids. With the Z.IA.’s eccentric owner Dr. Cazador, Jake and Miranda encounter poison-burping tatzelwurms, two-tailed cats called Bakenekos, and a blue tiger named Chung-Mae. When cryptids start disappearing, however, they have uncover the deadlier, even more top-secret Underzoo as well as a gang of villains.”

An excerpt from the Prologue:

“It’s weird what someone thinks about in the moments before a giant blue tiger tears him into a million pieces.

But at this particular moment, the thought that really nagged at him was: How in the world did he wind up in the cage of a maniacal, blue tiger?

However, the time for regrets was officially over. The tiger leaped, its razor-sharp claws catching the morning sunlight.

This was going to hurt, thought Jake, shutting his eyes.

This was going to hurt a lot.”

Here’s an image of one of the cryptids from the back cover: 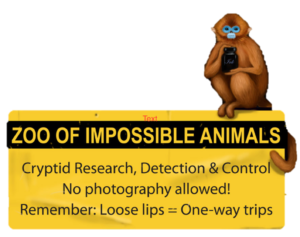 Buy a copy of the novel here!